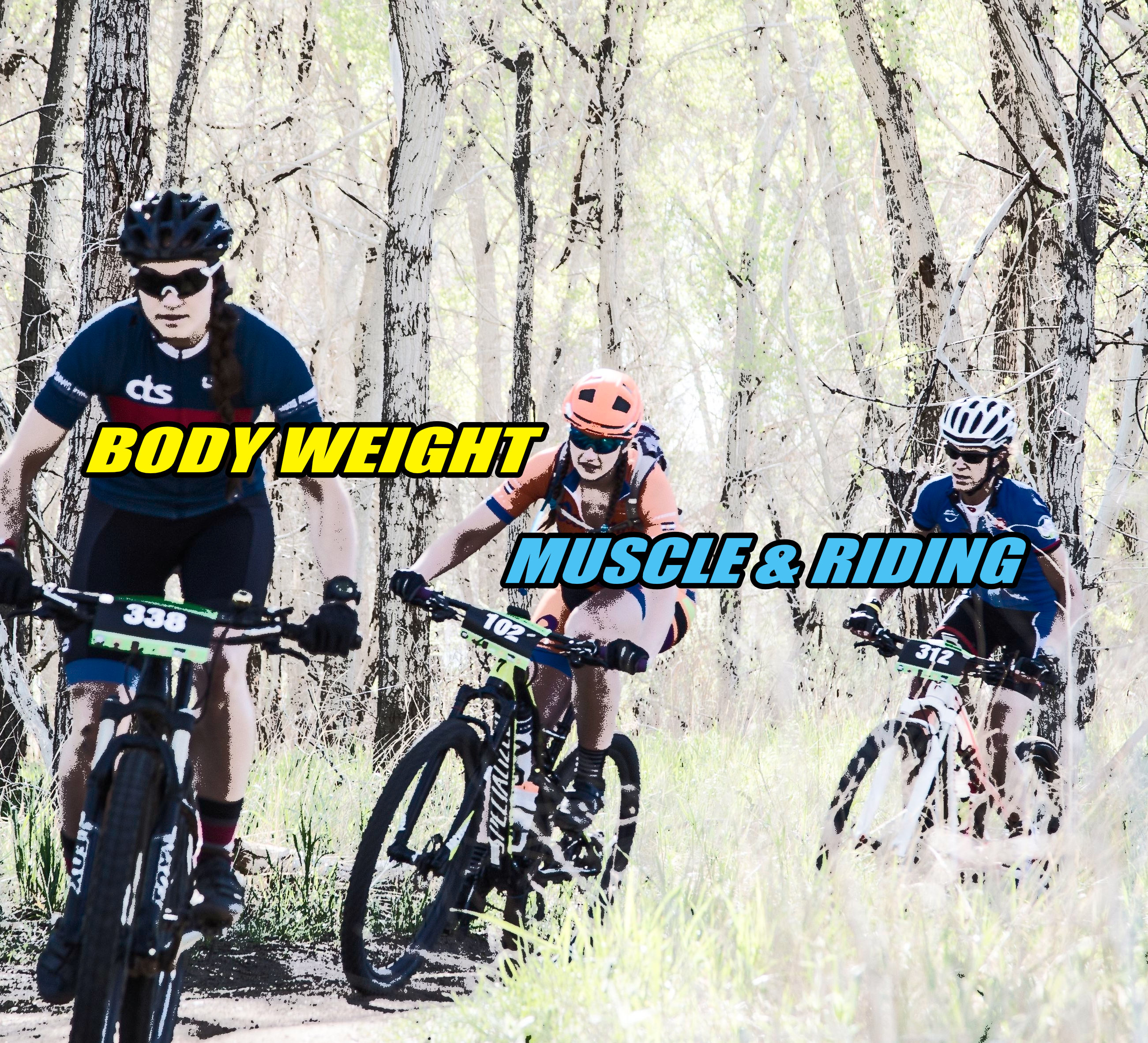 Mountain bike riders come in all shapes and sizes. Thankfully, mountain biking seems to cater nicely to all riders no matter of age, gender, physical size, shape, weight, fitness or skill level. But, regardless of where we fit into that list, most of us would like to be faster. How does body weight affect our speed and fitness? In this article we’ll look at several factors of how our body weight has direct and indirect affects on our riding in various ways.

Let’s start with the obvious. Fitness levels aside, if you are heavy for your body height (the author well and truly is these days), going up hills isn’t a fun task. Your more slim riding buddies are always going to beat you to the top of anything longer than a few metres climb. Your extra muscle bulk will help a little sometimes maybe, but they will likely be recovered and off again while you are still gasping for breath.

On long downhill sections, you might actually have an advantage if you are heavy for your body height, especially if the going is smooth. However, you are likely to loose much more time to your rivals in the climbs than you will gain on the downhills. Also, stopping and turning at the bottom might be more of an issue for the heavier rider than for somebody much lighter.

Going around bends, over bumps and jumps

This is where carrying extra weight becomes a little more complex. Let’s imagine 2 riders of the same height, one at a slim, healthy body weight and the other rider heavy for their body height. Both riders have equal riding skills. Both riders are on identical bikes which are set up to suit each rider’s weight.
A rider who is heavy for their body height arrives at a tight corner like anybody else. And hits the brakes to control speed, again, like anybody else. Hopefully, they have their suspension set up right to handle the increased load that is first thrust downward on the bike. This load is then transferred into the tyres (hopefully also with the right pressure for their weight).
Now the riders start to turn into the corner. At this point, a lighter rider has less load still trying to travel straight ahead, despite the rider and bike trying to turn. This is to their advantage. Also, the heavier rider, needing more air in the tyres to compensate for their weight, has less traction (see our Newbies Guide To Tyre Pressures for more info). More load and less traction is going to mean either a slower corner speed or they are likely to loose traction and steer off into the bush. With less traction to call on, the heavier rider also is more likely to loose traction under braking.
Now the riders are exiting the corner. The lighter rider has carried more speed through the turn and now has less overall bulk to get back up to speed. Their power to weight ratio is much better than the heavier rider’s power to weight ratio. We’ll talk more about that soon. By being able to accelerate more quickly, and with more ease, the lighter rider not only uses less energy but gets up to speed (maybe more speed) before the next turn.
With bumps and small jumps etc on the trail, it’s much the same news I’m afraid. A heavier rider has more impact to deal with on each bump or drop they hit on the trail. 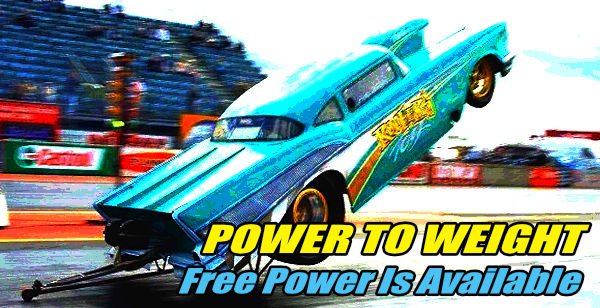 The term ‘power to weight ratio’ is often heard in motor racing circles and we also use this term with human powered sports. The ratio is simply a way to measure your maximum power against how much weight it has to drag along. The formula is simple, divide max power by weight. In road cycling, power metres are used on the bike in measured exercises to establish a rider’s power output in watts. When you consider in general terms that if for you it takes 75 watts to hold 20 kmh and you need another 20 watts to hold 22.5 kmh, then every increase in wattage is valuable. When the result is diminished by every extra kg of weight you carry, power to weight becomes an important consideration in competition whether it be racing or just thrashing about the bush with your mates.
For our purposes, an example might be a 100kg rider puts out a maximum of 300 watts. So, 300 W divided by 100 kg equals a power to weight ratio of 3 watts per kilogram (W/kg). Simple enough but what does this mean and why should you care? Well, if you were 70 kg and putting out 300 W then your ratio would be 4.2 W/kg meaning you have a lot more power per kilogram available. In fact, over a 1/4 more power has been achieved through weight loss, not extra training. In our example, this is a huge advantage just in outright speed alone. Factor in the consequences the extra load has on cornering etc and culmination results in more speed, less energy expenditure and less wear and tear on both bike and body.

Weight and our body 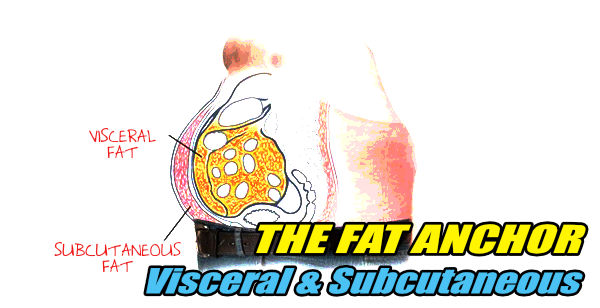 We’ve already mentioned several ways our body weight affects our riding however, what if we look within ourselves? The first thing to realise is that carrying extra weight means that we carry extra fat. Yes, I used the ‘f’ word. Let’s not get too medical here but understanding the effects might help motivate somebody to lose some weight.
Extra fat not only sits in those places we clearly see just under the skin (subcutaneous fat), it goes much deeper than that. Visceral fat is fat deposits deep within our body. Often, this fat is around our internal organs and is associated with many diseases and undesirable conditions. Visceral fat can even promote inflammation around your airways affecting your breathing and contributing to asthma. Too much fat of either sort can restrict our movement also, which isn’t ideal on a mountain bike. Extra weight also adds extra pressure on your joints, aggravating any existing injuries, adding to the possibility of new injuries and can be the reason for any number of other aches and pains. Sadly, for those of us who are heavy for our body height, there’s no good reason to stay that way if we can do anything about it. 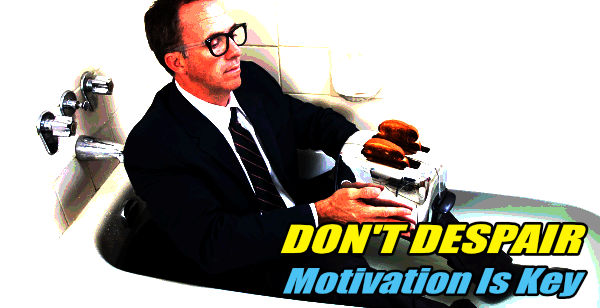 If you are carrying too much weight please don’t run off, grab the toaster and start running a bath. While we’d never encourage anybody to remain overweight, you can still be happy with how you are, as I’m sure most of you who are too heavy are to some degree at least. Losing weight can be impossible for those with conditions that prevent weight loss such as some thyroid conditions for example. Other illnesses or diseases can make the job equally difficult. But for most of us, it’s more about motivation than anything else. Finding the right motivation is paramount to success in this endeavour. Set achievable goals and steps that are bite sized. Sign up for charity rides and fun races and train for those. You’ll be amazed how much motivation that can bring.
In the end though, mountain biking isn’t always about speed and performance for every body. You decide what you want and need out of your mountain biking. As long as you are achieving the things on the bike you strive for, then you are doing fine and each pedal stroke is one better than if you were on the couch.

What weight should I really be?

Our society has conditioned us to accept more body weight than nature really intended. We often look at people who are perfectly weighted and see them as too skinny and unhealthy. Our perfect weight range is measured as our Body Mass Index (BMI) and is a calculation to estimate your body fat amount according to your height and weight. Using this system (used by many doctors and coaches) you are underweight if your BMI is less than 18.5. You are within the best weight range for your height if your BMI is 18.5 to 24.9. You are overweight if your BMI is 25 to 29.9 and obese if your BMI is 30 or more. And no, ‘big bones’ is not a thing when talking about your weight. Your skeleton will be roughly the same size as someone of your gender and height, no matter how much either of you weigh. Only about 15% of people have a slightly smaller skeleton than others of their height and only about 15% of people have a larger skeleton. And because the difference is minimal, the bones don’t affect the equation.
You’ll find plenty of free BMI calculators online to see where you are on the ‘scale’ of things. 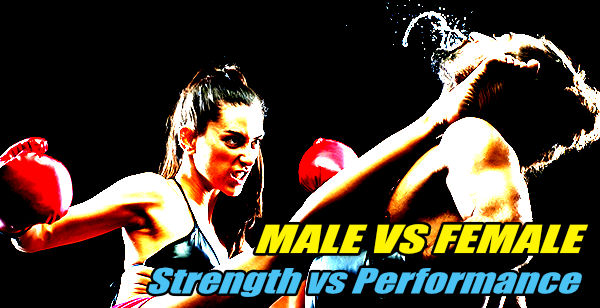 Depending on your source, men are somewhere between 30% – 50% stronger than women overall. The average women, as a general rule, produces around two-thirds of the total strength produced by an average male. Men also have around a third more applied force at their disposal. Physiology differences in the two genders also means women carry around two-thirds of the muscle mass that men do. On top of that, men have denser, stronger bones, tendons (band of tissue connecting muscle to bone) and ligaments (band of tissue connecting bone to bone). With these deficits in mind, it’s not hard to see why women struggle to compete in physical sports against men. So guys, next time you see a woman doing it tough out there, remember you have a distinct advantage, so cut her some slack.
So then, does this mean women can’t improve as quickly as men? Nope, not at all. Human tissue is the same regardless of what gender you are and therefore responds to physical stimulus in the same way. This means that if a woman trains at the same limits, intensities and thresholds as a male, she will see the same relative improvements. She simply won’t likely be able to match his overall performance levels in terms of strength.
One comforting factor however is that although down on overall strength, women are often a closer match to men in lower body muscles. This helps even the playing field a little at least on the mountain bike. Remember though that this is all talking in very general, non-specific terms and doesn’t take into account an individual’s particular physiological advantages or talents. But still, it’s good news for women that their tough workouts on and off the bike should result in similar improvements.

Ok then, I’ve called you fat and hopefully gotten away with it because a) I’m fat too, and b) I’m trying to help. With a bit of luck, you have learnt something about how your body weight affects your riding through various forces and loads and also affects your physical performance and health as well.