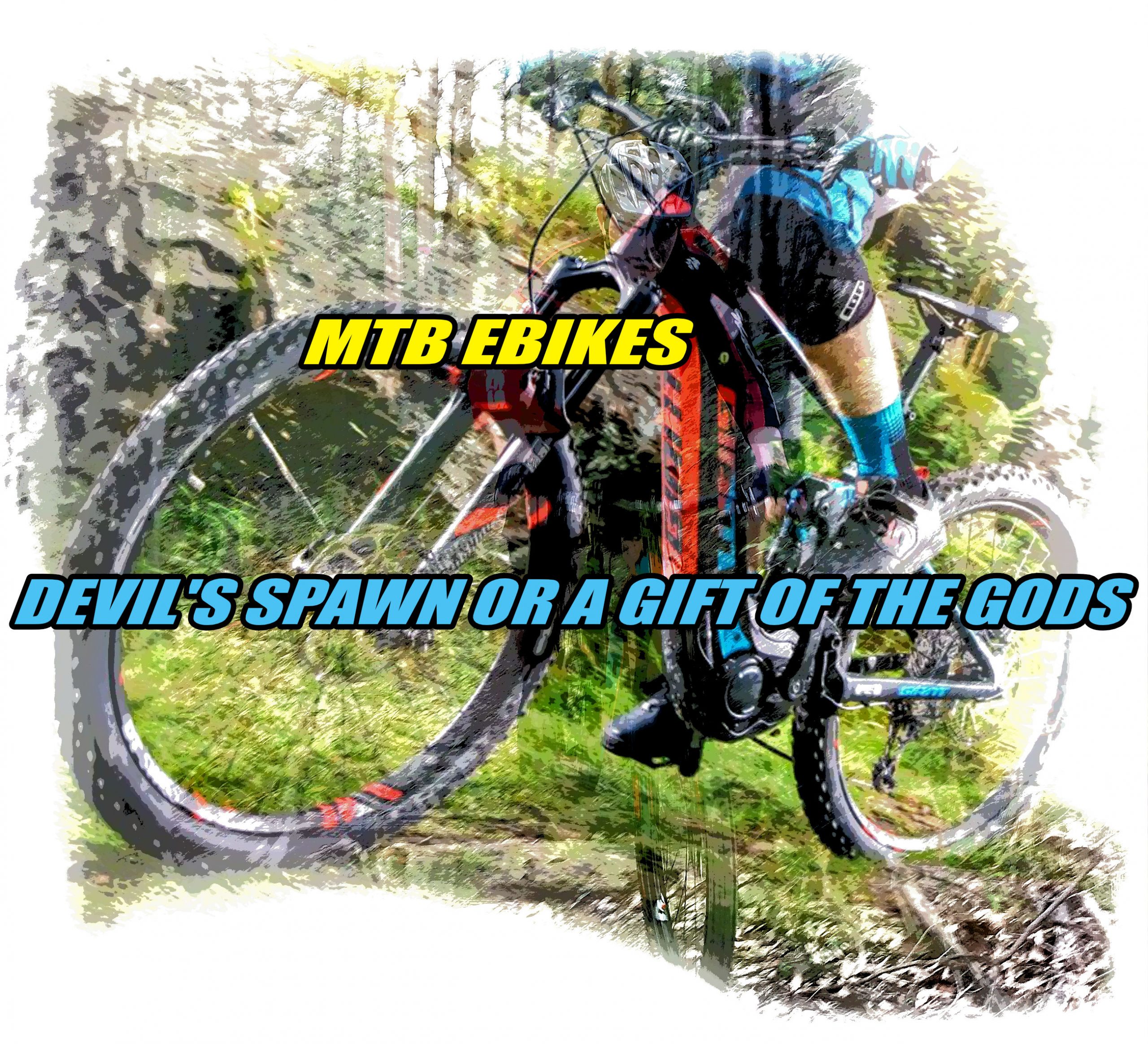 MTB eBikes – Devil’s Spawn or a Gift from the Gods?

The Only Constant is Change

Every now and then, a significant change comes along to the MTB scene to rock our world one way or the other. And every time it happens, riders are divided, vocal and opinionated about it. Not so long ago, 29 inch wheels made an appearance, and a few, forward thinking riders immediately embraced the new wheel spec while others stubbornly stuck to their old 26 inch wheeled steeds. Many of the 26’ers were very vocal about how 29’ers were a fad, the geometry didn’t work, they belonged on the road, it was cheating bla bla bla. Try to buy a competition level 26’er these days, especially if it’s a cross country or all mountain/trail bike! The 29’er thinking later spawned the 27.5 (650b) wheel size and soon the 26’ers were a rarity. Is the same thing going to happen to non pedal assisted mountain bikes now that MTB eBikes (pedal assisted) have arrived? I wouldn’t bet against it myself.

In a very short time, MTB eBikes have become a common sight on many trail rides at most popular locations around Australia and other places in the world. In that very short time, MTB eBikes have begun evolving and improving. What will they be like in 5 years time? 5-7 kgs lighter is a good bet I suggest. Much improved battery life another probability maybe. Maybe… even as common or more common than the bikes most of us ride today. Time will tell. Uninformed opinions today could well be tomorrow’s verbal egg on faces. So then, let’s explore what an MTB eBike is, what the advantages and disadvantages are and why someone would even want one.

What Is An MTB eBike?

What it’s not is something you climb on, twist a throttle, put your feet up and hang on while it does all the work. An MTB eBike is the same as a normal mountain bike in almost every way. You still have to have many of the the same skills (and a couple of new ones) to ride it well. You still have to change gears in the same way you do on a normal MTB. Same goes for brakes although they are usually a tad larger and stronger to handle the weight of an MTB eBike.
The main difference of course is the electric motor tucked down around the bottom bracket. There’s also a big ass battery to run it, some sort of handlebar mounted control/display unit, a pedal sensor and a bit of extra aluminum or carbon to accommodate it all. And, of course, when you pedal forwards, the motor kicks in and helps you drive the bike forwards. This ‘pedal assistance’ varies depending on the settings you choose from ‘not very much’ to ‘sit down, shut up and hang on!’ Especially when the rider has had the eBike’s software fiddled with to give more than legal 25 kph allowed in Australia. In this writer’s opinion, 25 kph is way too slow. Rider’s on standard MTB’s can easily surpass that speed while pedalling. Canada’s 32 kph is probably more like it.
So, that’s an MTB EBike in a nutshell. Like most things MTB, there’s always pros and cons to consider so let’s look at some of the advantages and disadvantages of riding one.

With pedal assistance comes some very handy advantages for those interested in such things.

On the other side of the coin, there are some distinct disadvantages also.

Why Ride An MTB eBike?

At the time of writing, the catch cry from the MTB eBike haters is “cheaters”. With no fear of what they think of me… all I hear is “I’m an ignorant fool who has…” a) “never ridden one” and/or b) “can’t afford one and I’m therefore jealous” and/or c) “am only capable of viewing the world from my own narrow perspective”. I should mention at this point that I do not own one. Currently, at time of writing, I don’t want one. And I have ridden several different brands and models this year. I can see why an MTB eBike is not only a good thing for some riders, it’s the right thing for them.

Take my wife. Anyone? Offers? No really… willing to swap for 2 younger models. Nobody? Oh well… consider my wife’s predicament then. She doesn’t have an MTB eBike either… we can’t afford one to be perfectly candid, but she hopes she will before too long. The reasons you ask? How about Rheumatoid Arthritis so bad she needs regular injections into various parts of her body to keep it at bay and at a pain level she can manage for daily chores? What about Fibromyalgia, an autoimmune condition which causes similar issues. A Hypothyroid condition which again produces a host of problems she has to deal with. She’s also Asthmatic. She also has Diverticulitis which reduces her food intake inventory to a handful of items making energy something very difficult to obtain. Decent sleep is a thing of the past with so many medical conditions battling against her. AND old age… she’s old… over 50!! Yeah I know right? Almost dead to some younger readers!!
So then, when she’s on an MTB eBike and some tool rolls up and tells her she’s “cheating”, one of you lot can explain to him/her when he awakes why I head butted him. Thanks. I’ll be off riding with my wife… because she’ll still enjoy life on a bike… because it’s an MTB eBike.

There are many reasons why someone would want an MTB eBike, other than being ridiculously sickly that is. “For better or worse” I said, so I have to keep her. I signed the certificate.
Lets look a list… we all love lists.

If you buy an MTB eBike and then go out do the same rides (same tracks and distances) you did on a normal MTB then you will definitely not get the same exercise. Essentially you’ve turned a good workout into a bludge on a bike. However, do more laps or take on steeper stuff more often on a ride… and suddenly you can work just as hard as someone on a standard mtb.

With increased speed on the flats and climbs, you now need to up skill to handle that increase. Trail awareness becomes a most important tool, as does line choice. Then, while climbing, you need to learn and understand uphill braking as well as dramatic and rapid body shifts. Pulling front wheel lifts and short manuals going uphill can even become a thing to name a few changes in your skill usage.

So then, with a bit of luck, a few giggles, a few facts, some rambling (do I ramble? Some say I ramble. I don’t think I ramble but it’s possible I ramble I suppose) and a host of viewpoints, I’ve hopefully given those not seeing the big picture a bit more to think about, and those who really knew very little about MTB eBikes, a bit more insight to them. I’ve hopefully made the point that…

So then… MTB eBikes, devil’s spawn or a gift from the gods? Guess it depends on your point of view… and all that stuff above.